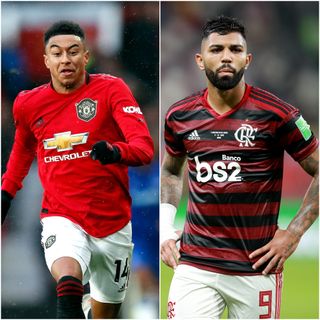 Jesse Lingard‘s future at Manchester United is looking increasingly cloudy with the Daily Mail reporting that the midfielder has linked up with super-agent Mino Raiola. The Italian has been publicly critical of the club in recent times and the team-up is said to have raised the eyebrows of much of the club’s hierarchy.

Chelsea are eager to make waves in the January transfer window and it appears manager Frank Lampard has found his primary target. The Daily Express says that Inter Milan striker Gabriel Barbosa is Chelsea’s main man as the club looks to reduce the attacking pressure on Tammy Abraham. Barbosa, 23, just finished a spell in Brazil, where he scored 70 goals in 112 games for clubs Santos and Flamengo.

Olivier Giroud is the man who could be the key to Chelsea securing Barbosa’s signature. The Birmingham Mail reports that Lampard has left the door open for the 33-year-old to depart the club. The France international is reportedly wanted by Inter boss Antonio Conte and the Blues could sweeten the deal for Barbosa by waiving Giroud’s transfer fee.

Barcelona have overtaken Chelsea and Manchester United in the race to sign Dinamo Zagreb forward Dani Olmo, according to Goal. Barca reportedly believe they can sign the 21-year-old for €30 million (£25.6m), however with the two English clubs also chasing Olmo, Dinamo are holding firm on their asking price of €40m (£34.1m).

The Sun says that a Premier League return could be on the cards for Emmanuel Adebayor. The 35-year-old’s camp is believed to have identified Aston Villa as a destination for the free agent following a season-ending knee injury to the club’s Brazilian forward Wesley. Adebayor has 10 years of Premier League experience under his belt with Arsenal, Manchester City, Tottenham and Crystal Palace, which makes him a valuable prospect for a side as youthful as Villa.

Jarrad Branthwaite: Everton and Watford are in the race to sign the 17-year-old Carlisle defender, according to the Watford Observer.

Ben Gibson: The Daily Mail reports that the Burnley defender is attracting interest from Bundesliga clubs Eintracht Frankfurt and Cologne.

Billel Omrani: The Sun reports that Sheffield United are plotting a move for the CRF Cluj striker this month.