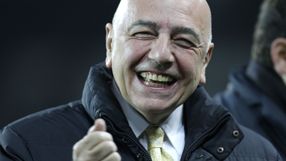 "We want a younger, more Italian Milan," he told reporters on Friday.

"I really liked the end of the match in Turin [the 2-1 defeat at Juventus in the Italian Cup on Wednesday] where we had all of our young attackers on the pitch.

"I don't think there will be any big signings," Galliani added amid speculation former Chelsea striker Drogba would be signing for Milan or Juve from Shanghai Shenhua.

"I don't really believe that Drogba will come to Italy."