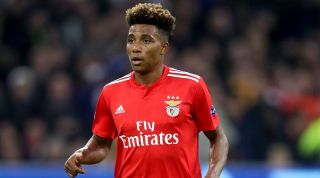 Tottenham are in pole position to sign Benfica midfielder Gedson Fernandes, who has also been linked with Liverpool and Manchester United.

The Daily Mirror report that Spurs have stolen a march on their Premier League rivals in the race to sign the 20-year-old.

Fernandes has enjoyed a breakout season in Portugal, making 21 league appearances as Bruno Lage's men challenge for the title.

This could be the youngster's first and last campaign in the Benfica first team, though, with a host of Premier League clubs chasing his signature.

And although United and Liverpool have both been keeping tabs on the Portugal international, Spurs are favourites to secure his services.

Mauricio Pochettino will have money to spend this summer and has made Gedson one of his principal targets.

A point against Everton on Sunday would guarantee Tottenham a fourth consecutive top-four finish in the Premier League.