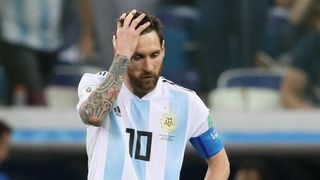 Lionel Messi is a "genius" and Argentina must make their World Cup last-16 tie against France as easy as possible for their captain, says coach Jorge Sampaoli.

Messi opened the scoring in a 2-1 defeat of Nigeria that sent Argentina through to the knockout rounds, Sampaoli's side bouncing back from a 3-0 thumping dealt out by Croatia.

Didier Deschamps said France will aim to "neutralise" Messi on Saturday, while captain Hugo Lloris pegged the Barcelona star as the potential matchwinner for Argentina.

Sampaoli, though, is focusing on ensuring Argentina are set up so "shining light" Messi can make the difference in Kazan.

"Leo is completely committed to the team, you see this on the pitch," Sampaoli said at a news conference on Friday.

"He is someone with such clear vision in football that he allows us to sometimes see things only a genius sees, the same for his team-mates.

"It's often difficult to be at such a level of Leo, he's a real shining light for us all, we have to play bearing in mind his capacity, playing as close to his level as we can. Some players can get used to him quicker because of experience, others maybe need more time.

"I'm sure they have a plan to neutralise Messi, but we have our own plan to make it easier for him. Let's see who has the best plan. We have the best player on earth, but we have others who can make things difficult for them too."

Ever Banega's superb long pass sent Messi away for his first goal of the tournament against Nigeria, the Argentina captain having opened the tournament by missing a penalty in a draw with Iceland.

"It's normal he wasn’t as confident as normal because we didn't start the tournament so well," said Sevilla midfielder Banega.

"Thankfully we won the last game and he appeared more comfortable on the pitch and when we spoke. He showed the will to win. We have a leader who's always thinking of winning.

"Messi has had a great performance with the national team, he always shows complete commitment and I hope he'll be around for many years.

"I have to say that it's always a pleasure with Messi, we know what he offers as a player and what he offers football. Over the years he's gained experience in Europe. I played the last match and tried to help as much as I could. Hopefully we can all continue to improve."