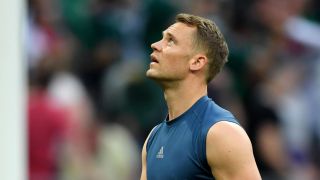 Germany's 1-0 loss to Mexico was a shock scoreline, but the history of the tournament shows World Cup holders often struggle under the pressure of being champions.

Hirving Lozano's fine first-half finish gave Mexico one of the most famous results in the country's footballing history in Moscow on Sunday.

Germany will still be expected to recover and progress from Group F, but Joachim Low's side will have to perform much better in their remaining games against Sweden and South Korea.

The last three World Cup holders have all failed to win the first game of their defence. We have picked out five of the worst performances from defending champions.

3 - This is the third consecutive World Cup in which the reigning champion has failed to win their opening match – Italy drew 1-1 with Paraguay in 2010, while Spain lost 5-1 against the Netherlands in 2014. Hangover.June 17, 2018

Having won three major tournaments in a row, many expected Spain to continue that sequence of success when they headed to Brazil as world champions four years ago. But they put in a disastrous performance in their opening match, losing 5-1 to Netherlands in a game that will be remembered for a stunning flying header scored by Robin van Persie.

Spain went on to lose against Chile in their next match too, meaning they were eliminated before even playing their final fixture. A much-changed XI restored some semblance of pride by beating Australia, but the damage had been done.

Champions in 2006 having beaten France on penalties in the final, Italy also struggled under the spotlight when they came up against a stubborn Paraguay outfit in Cape Town. Marcello Lippi's side were without key midfielder Andrea Pirlo due to injury and his absence was keenly felt, Antolin Alcaraz heading Paraguay ahead. Luckily for Italy they were handed an equaliser when a mistake from goalkeeper Justo Villar enabled Daniele De Rossi to claim a point.

Following that opening flop, Italy drew with New Zealand - again having to come from behind - before losing to Slovakia, finishing bottom of what had appeared on paper to be a very simple group.

Diego Maradona inspired Argentina to glory in 1986 but he was helpless as his side were beaten 1-0 by Cameroon in the first game of their title defence four years later in Milan. Francois Omam-Biyik scored one of the most famous goals in African football history to win the match.

Argentina squeezed through - they qualified as one of the best third-placed teams thanks mainly to a 2-0 defeat of the Soviet Union - and made it all the way to the final despite their sloppy start, losing 1-0 to West Germany in Rome.

Heading back to the World Cup hosted by Argentina in 1978, West Germany were unable to get off to a winning start when they were held to a goalless draw by Poland in Buenos Aires.

Current Poland coach Adam Nawalka was in the side that frustrated West Germany. They qualified from the group stage but exited after a 3-2 loss to Austria in the next phase.

Brazil's goalless draw against Yugoslavia at the 1974 World Cup put them on the back foot after just one game. The Selecao side of 1970 is regarded as one of the greatest ever football teams, but despite boasting names such as Rivelino and Jairzinho in their XI four years later, there was no way through the Yugoslavia back line.

Brazil also suffered a 0-0 draw against Scotland but beating Zaire ensured they progressed to the second group stage, from which they had to settle for a spot in the third place pay-off.