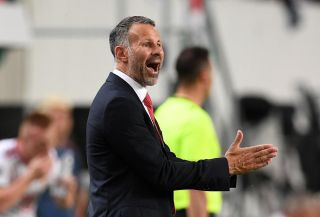 Wales manager Ryan Giggs accepts he will be criticised for his decision to select Tom Lawrence for international duty.

Derby forward Lawrence is due to appear at Southern Derbyshire Magistrates’ Court on October 15 – two days after Wales’ vital Euro 2020 qualifier with Croatia – having been charged with drink-driving.

Lawrence was charged after a crash involving his Range Rover Sport last month.

“It was definitely a conversation that needed to be had with the FAW (Football Association of Wales), with Derby and with Tom about whether to pick him or not,” Giggs said after naming Lawrence in his 26-man squad for the qualifying double-header with Slovakia and Croatia.

“But ultimately it was down to me and down to my decision to pick him.

“I recognise that I will (get criticism), but if I hadn’t picked him there would have been criticism from the football community.

“People are entitled to their own opinion. I’m sure opinion is split and I recognise both sides of the argument.

“But from my point of view, I want to pick Tom for football reasons.

“He is a good player and has been a big part of my plans since I took over. I wanted the chance to pick him and see how he is.”

But Derby boss Phillip Cocu recalled Lawrence for the Rams’ 2-2 draw at Barnsley on Wednesday night, when he was booed by sections of both sets of supporters.

“I can’t tell you what will happen in the future,” Giggs said when asked if he feared that Wales fans would jeer Lawrence during the upcoming qualifiers.

“I just looked at all the different situations and felt that for Tom and for Welsh football this was the right decision.

“I think it was important to liaise with Derby to see their stance and they thought similarly to me really.

“They picked him (against Barnsley) and played him.”

“I know Tom from my Man United days, I gave him his debut.

“I know him as a character and whether that should come into question I don’t know.

“But I know Tom is a good guy and as a football manager I just want to see how he is.

“There will be a conversation to have about how he is feeling and the whole situation. We will give him the chance to put his point across.”

Skipper Ashley Williams, having played games at his new club Bristol City, has been recalled to the squad, while Aaron Ramsey, Rabbi Matondo and Tyler Roberts also return after injury.