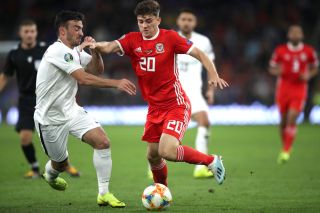 James – who has scored three goals in four games for United since his summer switch from Swansea – curled home a superb 17th-minute winner from 18 yards.

The 21-year-old was a constant danger before replaced after 50 minutes by Gareth Bale, who started on the bench and passed on the captain’s armband to Joe Allen.

“He (James) is one of those players, you know what he’s going to do but you can’t stop it,” Wales manager Giggs said.

“There are so many goals (he’s scored) like that. He can go either way.

“Early on when I saw DJ, just like any young winger, there can be that improvement in the final ball and scoring more goals.

“But he’s doing that. To do what he’s done at the start of the season is amazing.

“The next step obviously is that consistency, which he’s shown so far and he needs to carry on. But I’ve got no doubts that will happen because he wants to be the best.”

Giggs made five changes from the side that had beaten Azerbaijan 2-1 in Euro 2020 qualifying on Friday.

Bristol City midfielder Joe Morrell and Wigan striker Kieffer Moore made their debuts and it proved a comfortable Cardiff victory against limited opposition.

On a positive night that brought a rare clean sheet for Wales, there was further good news in their European Championship qualifying section.

Leaders Croatia were held 1-1 by bottom team Azerbaijan in Baku, while Hungary – who started the evening in second spot – lost 2-1 at home to Slovakia.

“I don’t think they’re the worst results in the world,” Giggs said.

“It was a difficult one with Hungary and Slovakia. We definitely didn’t want a Hungary win.

“But we’ve got to focus on ourselves. It’s still in our hands.

“It’s been a good week training and I’ll look keenly at a couple of players who could make the squad for the next game.

“I just hope everyone else stays healthy, and the key for me is for my players to get games.

“All I ask is that they’re playing – if I’m going to be greedy, playing in the positions I want them to be playing in. That’s the ideal situation for an international manager.

“But I’m delighted with the way the two games have gone.”

Belarus manager Mikhail Markhel admitted debutant defender Nikolay Zolotov might have seen red had the game been a competitive match.

Zolotov was booked early on and was guilty of several crude challenges, including a bad tackle on Harry Wilson in the second half.

“It was his debut and he played quite good,” Markhel said.

“But as with any player who plays for the national team for the first time, he was slightly stressed and enthusiastic.

“It’s understood by the coaching staff that if it was not a friendly match he could have been sent off.”