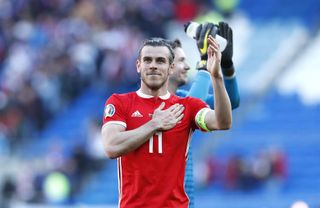 Ryan Giggs has dismissed claims that Gareth Bale has fallen out of love with football and insists the Real Madrid star’s enthusiasm for the game is as strong as ever.

Wales forward Bale endured a torrid end to the season, as Real manager Zinedine Zidane dropped him from his starting XI and even refused to bring him off the bench in the final league game.

Bale has become a regular target for Real fans, who have accused the 29-year-old of being more interested in playing his self-confessed passion of golf than football.

But Bale remains Wales’ talisman heading into Euro 2020 qualifiers against Croatia and Hungary, and Giggs said: “I saw him this week (at a Portugal training camp) and he looked like he enjoyed football to me.

“He was sharp, he wanted the ball, and he was practising his trademark of cutting in on his left foot. He scored a great goal.

“Afterwards when a lot of the lads went in he was practising his shooting, so that doesn’t strike me as someone who just wants to get off and go back to his room.

“It struck me as a professional who still loves football.”

Bale joined Real from Tottenham in 2013 for what was then a world-record fee of £85.3million.

He has since won four Champions League titles, scoring decisive goals in two of those finals against Atletico Madrid and Liverpool, as well as three FIFA World Club titles, a LaLiga crown and a Copa del Rey title.

But the future of Bale, who has scored over 100 goals for Real and is contracted there until 2022, remains uncertain, with the Spanish giants reportedly keen to get him off the wage bill this summer.

Bale managed only 14 goals this season, has not scored since the middle of March and a recent poll of almost five million Real fans indicated only nine per cent wanted him to stay at the Bernabeu.

Asked if he was surprised by the criticism aimed at Bale in Madrid, Giggs said: “Yes, but I’m not over there.

“I’m not a Real Madrid fan. I don’t know the ins and outs and I’m only looking from the outside.

“But you’ve got a player who won the team the Champions League final last year with one of the best goals you’ve ever seen and performs for that team week in, week out.

“It’s that kind of club, it’s a club like no other where the white handkerchiefs come out if they don’t like you. That’s just the way it is.”

Bale has completed 90 minutes only twice since Wales started their Euro 2020 qualifying campaign with a 1-0 home victory over Slovakia on March 24.

And Bale’s fitness will be tested in the double-header with Croatia and Hungary, the two games coming in the space of three days and expected to be played in hot conditions.

“If he’s flying for Real Madrid then I’m asked if that’s a benefit,” Giggs said.

“If he’s not, then he’s coming in fresh. There is always an angle. We played a game (on Tuesday) and he looked really good, sharp and really fresh.

“I’m excited to see him in these two games.”