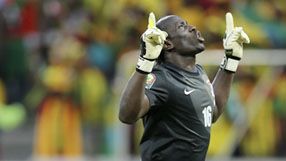 The 1-1 draw at the Mbombela Stadium between the two heavyweights in Group C leaves both teams perilously placed without a win but still with a chance to grab a quarter-final place early next week.

"I'm happy with the result because of the circumstances," Zambia coach Herve Renard told reporters.

"Never forget we had Nigeria ahead of us. We are still alive and we are still in a good way to qualify."

Mweene slotted home an 85th-minute spot-kick after Emmanuel Mayuka had been tugged down on the edge of the Nigerian area by Ogenyi Onanzi in what looked a harsh decision from Egyptian referee Grisha Ghead.

Nigeria had taken the lead in the 57th minute through Emmanuel Emenike's second of the tournament after John Obi Mikel had won the ball in midfield and played in a decisive pass.

Obi Mikel had earlier missed a penalty midway through the first half.

Mweene had it covered as the ball struck the outside of the post although the keeper said afterwards he did not get a touch to it.

The penalty was awarded after a clumsy challenge by Davis Nkausu, shifted from full-back to central defence, on Ahmed Musa.

Zambia have now given away penalties in their last four Nations Cup finals matches and, in an incredible run of fortune, seen their opponent fail to score on each occasion.

The champions had the better of the first half exchanges as they pinned back Nigeria, who had Victor Moses in the line-up after injury, but laboured in the second period.

Nigeria boss Stephen Keshi said: "I have no choice but to be happy but my goal was to get three points. Zambia were never going to be easy to play against."