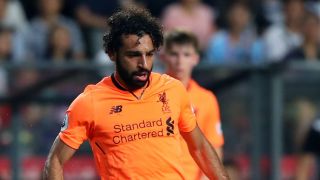 Liverpool winger Mohamed Salah has called on his team-mates to take emulate their prolific Champions League form when they return to domestic action against Tottenham Hotspur on Sunday.

The Reds chalked up their biggest margin of victory in a European away game when they beat Maribor 7-0 in Slovenia on Tuesday, with Salah scoring two first-half goals.

The rout ended a somewhat lean spell in front of goal, in which Liverpool drew a blank against Manchester United and scored one goal each on their trips to face Newcastle United and Spartak Moscow.

Salah told BT Sport: "We had bad luck [in the last few matches]. In the last three or four games we missed many chances.

"If you saw the games you know we created many chances that we missed and we had bad luck.

"Now I think that everyone has confidence that good results are coming, so now we are in a good position and I'm sure in the next games it will be the same."

The 25-year-old's brace took his personal goal tally to eight in all competitions since joining Liverpool in June, and he said: "I'm very happy for that, but seven goals or eight goals doesn't change anything.

"The most important thing for us is to concentrate on improving the results in the Premier League."

Good win and performance from the boys tonight October 17, 2017

After scoring Liverpool's sixth against Maribor and his first since signing from Arsenal, second-half substitute Alex Oxlade-Chamberlain told The Guardian that there was a positive mentality at the club despite a difficult start to the season that has left them eighth in the Premier League table.

The former Arsenal winger, who has yet to start a Premier League game for Jurgen Klopp's side, said: "We're in an important part of the season where we want to get off to a good start and we've got a few results that haven't gone our way.

"Everyone's fighting for their place and I'm just ready for when I get the opportunity. I need to keep developing and learning a new style of play here and get used to that and then whenever I get my opportunities, try to do as well as I can."