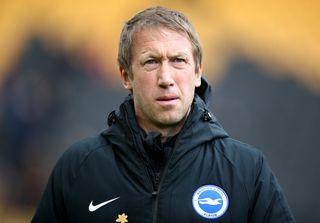 Brighton boss Graham Potter insists he will not compromise his footballing philosophy as he attempts to drag his relegation-threatened side away from danger.

Albion return to Premier League action at home to Arsenal on Saturday afternoon seeking an overdue first win of 2020.

The 15th-placed Seagulls sit just two points above the drop zone having gone nine top-flight games without success before play was suspended due to the coronavirus pandemic.

Despite the alarming slump and a daunting run of fixtures, Potter does not intend to ditch his tactical approach.

“The principles will stay the same. We’ve watched a lot of football back, a lot of our games and of course we can do things better,” said Potter.

“The point is to try to be honest enough to understand those and then move forward.

“But the principles I think will remain and then always the numbers in terms of the tactical organisation, that can depend on the players, how we want to do in the game.

“I think the break was good for us in terms of giving us a bit of clarity and we have used it quite well, I think, we have prepared well and we are really happy with how the training has gone.

“But the games are the most important thing so that is what we are looking forward to and what we are excited about for Saturday.”

Brighton go in search of a first league double over Arsenal having recorded a shock 2-1 win at the Emirates Stadium in early December.

Since that unexpected success, which came against a Gunners team under the caretaker management of Freddie Ljungberg, the Seagulls have drawn eight and lost five of 14 top-flight games and been sucked into trouble.

Albion are bidding to prolong their Premier League stay to a fourth season.

Potter, whose side also have testing fixtures against Leicester, Manchester United, Liverpool and Manchester City on the horizon, acknowledges his players will need to scrap to preserve top-flight status.

“If it does not go well it is a setback, obviously. We are aware of that and aware of the responsibility that we have,” said Potter when asked about the prospect of relegation.

“At the same time we have got nine games to play and 27 points to play for and I think it is important that we focus on trying to get as many points as we can to stay in the Premier League, to try to get the points we need.

“Nobody has a God-given right to be in this competition, in this league, so you have to fight for it.”