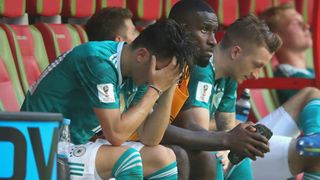 Been pretty good so far, hasn't it? Yep.

Holders Germany were knocked out at the first round for the first time since 1938, Cristiano Ronaldo bagged a stunning hat-trick goal on only the second day, and Senegal became the first team to be eliminated from a World Cup on fair play rules.

With a rest day ahead of the last-16 clashes, we've rated and slated every team based on their group-stage performances...

The hosts were on a seven-match winless streak going into the tournament, but ended it by thrashing Saudi Arabia 5-0 on the opening night, and then hammered Egypt 3-1. Uruguay brought them crashing back down to earth with a 3-0 win in the final game to top the group, though.

Saudi Arabia and Egypt made early exits after losing their first two matches, but Juan Antonio Pizzi's side at least secured a consolation 2-1 win over the hapless Pharaohs.

There were no surprises in Group B's finishing positions as Spain and Portugal progressed to the knockout stages, but their opponents didn't make it easy for them. Iran almost pulled off a major upset when, with a little help from VAR, they held Portugal to a 1-1 draw in their last game, while Spain needed a stoppage-time strike from Iago Aspas to avoid defeat against Morocco and win the group.

The best match was easily the 3-3 draw between the favourites; Spain came from behind twice before taking the lead through Nacho Fernandez's stunning strike, but Ronaldo rounded off a hat-trick with a sensational 88th-minute free-kick to share the points.

France may have won the group, but they did so with extremely underwhelming performances. Two narrow wins over Peru and Australia confirmed qualification with a game to spare, but Les Bleus were held to a 0-0 draw by Denmark in their last outing.

Peru went into their final match knowing their first World Cup in 36 years was already done, but they played proudly and gave their fans something to cheer with a 2-0 win that knocked Australia out.

All eyes were on Lionel Messi's Argentina as they came close to a shock early exit. In a tight final outing, goals from the captain and Marcos Rojo – the latter coming in the 86th minute – secured the win they needed to advance against a gusty young Nigeria team.

Iceland started well in their first World Cup - Hannes Halldorsson saved a Messi penalty to earn a point - but couldn't keep the momentum going. Croatia dominated the group and were easily the stand-out performers, thumping Argentina 3-0 as they won all three games and conceded just one goal.

Brazil's tournament got off to a rocky start when they were held 1-1 by Switzerland, but two stoppage-time goals against Costa Rica set them on their way to top spot.

Serbia looked promising in their opening 1-0 victory over Oscar Ramirez's side, but their spark fizzled out, and losses to Switzerland and Brazil eliminated them. Costa Rica made an early exit but shared the points with Switzerland in their last match, which was enough for the Europeans to qualify for the knockout stage.

Defending champions Germany provided the biggest shock of the tournament by becoming the fourth holders in the last five tournaments to be eliminated in the group stage. After losing to Mexico, Toni Kroos secured a dramatic 2-1 win over Sweden with a late free-kick, and it looked like the wind was back in their sails.

But two stoppage-time goals from the eliminated South Korea knocked them out. Mexico won their first two games in style but failed to clinch top spot as Sweden cruised to a 3-0 triumph and topped the group.

Just like Group B, there were no shocks here. England and Belgium turned on the style to record big wins - Belgium beat Tunisia 5-2, while England thrashed Panama 6-1 - and secure their place in the knockout stages. It came down to the final game to find the group winners, and Belgium – who made nine changes to their line-up compared to England's eight – edged it with a wonderful goal from Adnan Januzaj.

Tunisia came from behind to beat Panama 2-1, meaning they went home with some pride.

Group H was easily the closest contest. Poland were eliminated after defeats to Senegal and Colombia, who consequently had a chance of qualifying following an opening-day defeat to Japan.

They did just that by overcoming Senegal 1-0, and the coupling of that result with Poland's 1-0 triumph over Japan meant Aliou Cisse's side were eliminated on fair play rules. The Samurai Blue consequently followed Colombia out of the pool.