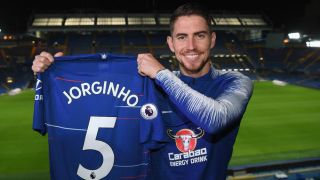 Manchester City manager Pep Guardiola believes it would have been a "mistake" for Jorginho to sign for the Premier League champions if he wanted to join Chelsea.

Jorginho was tipped to make the move to City, however, the Italy international midfielder opted to reunite with former Napoli boss Maurizio Sarri at Chelsea.

City were reportedly angry with Napoli – the Manchester club feeling Jorginho was pushed to turn down the Etihad Stadium for Stamford Bridge.

However, Guardiola wished Jorginho well in England after missing out on his top midfield target.

"No, I'm not disappointed," Guardiola told reporters ahead of City's International Champions Cup clash with Borussia Dortmund on Friday.

"We tried, but at the end all my advice for the players is that they have to go where they want to go.

"For the guy, it would have been a mistake for him and for us if he had decided to come here when he wanted to go with Maurizio and Chelsea.

"So it is important that English football has received an exceptional player and at the end if they want to come, it's better they come.

"If he decides to go to Chelsea for the reasons he has explained or will explain, then all the best for him."

A number of City's stars are absent for the pre-season fixture following the World Cup in Russia.

But one player who will be involved against Dortmund is out-of-favour goalkeeper Joe Hart.

Hart spent last season on loan at West Ham, however, the former England number one is in the squad as he searches for a permanent move away.

"Joe is our player. His situation is that he is here. We will try and find solution for him. If not, he will stay here," Guardiola said.

"He's one of the most incredible professionals I've ever met. He is training like a young guy of 18 years old.

"I know it's not easy for him given what's happened in the last period. But he is with us and tomorrow he's going to play."