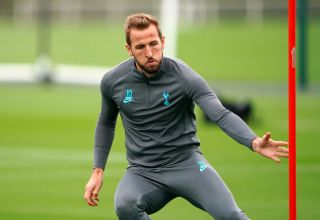 England captain Harry Kane insists his decision to stay in the Bahamas and quarantine on his return has not done his chances of hitting the ground running this season any harm.

Kane and his family were holidaying in the Caribbean in the short break between the close of the prolonged 2019-20 campaign and the return to pre-season training.

During their stay, the Bahamas was added to the list of countries from which anyone arriving in the UK would have to quarantine for 14 days.

Kane took the decision to stay rather than attempt to make it back home before the changes came into effect.

Perfect birthday on the beach with my girls 🎂 Thanks for all the kind messages 🙏 pic.twitter.com/4LGXVmFekN— Harry Kane (@HKane) July 28, 2020

That meant the 27-year-old was unable to begin pre-season training until a week ago and was merely a spectator in Tottenham’s 1-0 friendly win over Birmingham last Saturday.

“Looking back now I don’t think it’s done me any harm having that extra week away, being refreshed with the family,” he said on the eve of England’s Nations League clash away to Iceland.

“I had a good back end to last season, feeling fit and sharp, so hopefully I can take that into this year.”

Many questioned why Kane did not make it back before quarantine rules were enforced – but he explained he was able to prepare for the season at home on his return and ahead of rejoining his team-mates.

“Obviously the best case situation would have been to be training with the team for a couple of weeks.

“It (the quarantine change) gives you 24 hours to get back but it’s not the easiest place to get back from, there’s no direct flights.

“So I stayed there for another week and then had to quarantine when I got back. So it’s one of those situations – it wasn’t ideal but you have to adapt to it and get on with it.

“I’ve done as much as I could at home in my gym and out in the garden but there’s nothing like training with the team.

“So it’s been good to do that with England in the last four or five days, and I guess you’re never really sure how ready you are until you’re out there on the pitch.

“But in training I’ve felt fine, I feel sharp, I’m ready to go, so I guess we’ll just assess it game by game and see how I feel.”

Asked if he felt, after a season which was extended following the halt caused by the coronavirus pandemic, staying in the Bahamas for his full holiday was the better option Kane replied: “It’s a 50/50 one.

“I think the mental rest and physical rest is just as important as coming back and having a good pre-season.

“Obviously we’ve got a full-on schedule now until next July hopefully, if we go all the way in the Euros. That was a balance and, like I said, logistically it wasn’t an easy decision or easy place to get back from.”