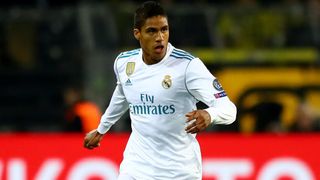 Real Madrid defender Raphael Varane lauded coach Zinedine Zidane for never allowing him to get into his comfort zone.

Varane, 24, signed a new deal with the LaLiga and European champions last week, extending his contract until 2022.

The France international hailed Zidane, saying he had learned plenty from working with his countryman.

"He has given me a lot, in my attitude, in my play and in the risks that I take," Varane said, via Marca.

"He is someone that doesn't allow me to remain in my comfort zone, he has a lot of experience and it is a great opportunity for me to learn from him."

Varane has won two LaLiga titles and three Champions League crowns, among numerous other trophies, since arriving at Madrid from Lens in 2011.

The centre-back believes he will only get better, saying: "I have my style of play and people can criticise me for that which is not a problem.

"I try to play to my strengths and I think I am a more rounded player now aged 24 than I was aged 18.

"In my position you talk about a mature player being around 28 and it is normal that you improve."