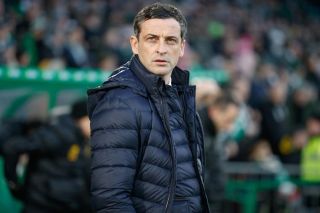 Hibernian head coach Jack Ross insists he shares owner Ron Gordon’s ambitions of being in the top four in every competition as he prepares for their William Hill Scottish Cup quarter-final against Inverness.

Ross has the chance to fulfil Gordon’s demand at the first time of asking when the Ladbrokes Championship promotion hopefuls visit Easter Road on Friday.

United States-based Gordon unveiled his plans for the club on Wednesday and Ross believes he is right to aim high.

“When I came into the job, people asked about my ambitions for the club, I said that we viewed the two domestic competitions as a chance to win silverware. That should always be the case for us,” said Ross.

“In any cup competition, you always need elements of fortune with regards to the draw and these one-off games, but we should always believe we have a chance of winning the competition and progress to the latter stages. And the club to be fair has done that consistently over the last decade.

“Friday night represents another opportunity to do that and I don’t think there’s anything wrong in believing that should be the aim for us at the start of every season.”

Gordon announced his five-year plan at his first annual general meeting, stating he hoped to double the player budget by 2023.

“I had heard Ron’s presentation prior to last night,” Ross said. “It was part of the attraction of coming to the club in the first place because when I met him initially I had a feel for what he wanted to achieve at the club.

“I don’t view my position as one that’s simply about being able to spend lots of money. It’s about being part of a club that progresses and becomes better.

“Whenever I leave clubs at any time, I hope I have improved them and strengthened them in what I can control.

“Naturally if we find ourselves in a position further down the line that we are able to recruit even higher quality players in one or two positions then there’s an obvious benefit to do that but you have to use the resources in the right way as well.

“But certainly I believe there’s a bigger picture, his ambition and plans for the club are exciting for everyone involved, those that follow the club and those that work within it.”

To achieve the aims, Gordon has set the goal of increasing turnover by 50 per cent by 2023 on the way to doubling it by 2025. To do that, the owner hopes to be selling out Easter Road every week.

Ross has got Hibs scoring more goals – 12 in their last five home matches – but he realises that consistently winning is the only surefire way of filling the stands.

“I always felt it was a good fit and hopefully we have shown that over the last few months because there’s an expectancy upon Hibs to play a certain way,” he said of his playing style.

“I think it helps attract people to the game but from my experiences the easiest way to fill stadiums is to win. Ideally to win in the nicest possible way on the eye but the truth is if you win most weeks people will come and watch.

“We all get romantic about watching nice football being played but if you have an affection for a club you just want to go and see it win.”