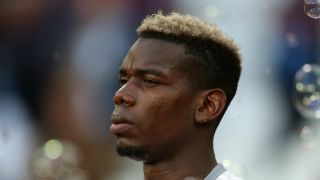 Paul Pogba has hit out at suggestions he could leave Manchester United for a return to Juventus.

Paulo Dybala said earlier this month he was "very happy" after hearing rumours of a possible Serie A return for the France international.

Pogba has previously insisted there has not been a breakdown in his relationship with United manager Jose Mourinho, who benched the midfielder for both legs of their Champions League last-16 exit to Sevilla.

Although rumours over his United future continue to grow, Pogba rejected speculation he will leave Old Trafford for Juventus after he hit a deflected winner in France's World Cup 2-1 opening victory against Australia on Saturday.

"I am with the France squad, I don't want to speak about the future of the club and all this," Pogba told reporters.

"Yes, I speak with Dybala, but whether I speak to Dybala or speak with [Samuel] Umtiti, who plays at Barcelona, it's not there I will go and play!"

Pogba had a hand in both goals against Australia, although his winner took a large nick off Aziz Behich.

"We knew it will be hard as it's a World Cup game," Pogba said. "We stay positive and only think about the three points we've gathered.

"We have young and very talented players. Some have already featured in a World Cup, others not. So they need to learn.

"I think that after this game, the ones who didn't know have a pretty good idea of what it's about. It's the very high level. Pressing with pace. We expect a better game from the team next time around, but if we can win all the games by playing like this, we take it.

"Australia are very strong defensively, they don't let spaces open. Sometimes, you win like this so we don't have to be too hard on ourselves. We have to do better and we will."