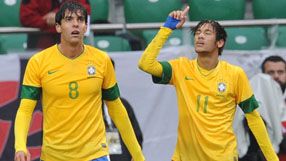 Japan, unbeaten in their previous eight games, began confidently after beating France 1-0 in Paris on Friday but were ultimately outclassed on a cold, wet day in the Polish city of Wroclaw.

Midfielder Paulinho opened the scoring and Neymar converted a harshly-awarded penalty to put Brazil 2-0 ahead in less than half an hour.

Neymar struck again at the start of the second half and Kaka, on target on his international return after a two-year absence against Iraq last week, completed the scoring.

Brazil, 6-0 winners over Iraq on Thursday, also hit the woodwork twice and could have scored several more goals as they clocked up their sixth win in a row.

Menezes, who replaced Dunga after the 2010 World Cup, set himself an ambitious task of completely rebuilding the side and changing their style of play in time for 2014.

Although Brazil have won most games under his leadership, his experimental teams have often been unconvincing and there has been speculation as to whether he will keep the job until the home World Cup.

There were no questions about Tuesday's performance, however, the combination of Oscar and Kaka in midfield and Neymar and Hulk in attack allowing Brazil to create chances seemingly at will.

Japan produced the first chance when Keisuke Honda's low drive was saved by Diego Alves' legs and briefly appeared to have Brazil on the back foot.

But the complexion of the game changed in the 11th minute when Kaka laid the ball off to Paulinho and the Corinthians midfielder found the net with a low shot from 25 yards for his second goal in six internationals.

Paulinho should have added another when he latched on to Oscar's incisive pass and rounded Eiji Kawashima, only to shoot wide of an open goal.

Kaka also hit the foot of the post before Yasuyuki Konno was judged to have handled in the area, even though it appeared accidental, and Neymar fired home the penalty.

The speed and variety of Brazil's attacks overwhelmed Japan and Neymar struck again only three minutes into the second half, collecting a corner at the far post and scoring with a mis-hit shot which went in off Makoto Hasebe, his 16th goal in 25 internationals.

Japan bravely pushed forward to try and reduce the deficit but left themselves badly exposed and Brazil looked dangerous every time they went forward.

Hulk hit the post from a free-kick and another attack ended with Kaka slipping past his marker to fire the fourth with a low left-foot shot.