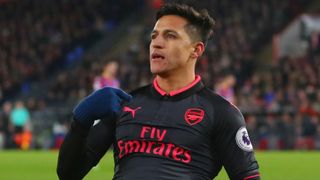 Arsenal star Alexis Sanchez has opted for Manchester United over Manchester City because the Red Devils are "miles bigger" than the runaway Premier League leaders, according to Paul Ince.

Chile international Sanchez – out of contract at the end of the season – is poised to join United having snubbed Pep Guardiola and City.

The 29-year-old forward had been tipped to swap Arsenal for City in a reunion with former Barcelona boss Guardiola, however, United hijacked their neighbour's move, with some past players and pundits claiming Sanchez's decision is based on money.

However, former United midfielder Ince insisted City simply cannot compete with the history of their rivals – the 20-time English champions.

"Everyone is raving about City. But when it comes to the two clubs, Man United are miles bigger than City. Players would still prefer to go to them over Pep's side – that's a fact. Players won't go to City because they think they're a bigger, more historic club than United. Because they're simply not," Ince told Paddy Power.

"Some might get the quick satisfaction of winning the league this year, but those years of history, and the side that [Jose] Mourinho is building – players want to be a part of that.

"This signing only confirms that. Sanchez had the opportunity to go into a team where he could have won a trophy. But he didn't, he chose to go to United because of everything they stand for and that says a lot about the size of the club.

"City have some unbelievable players, but winning the league this year doesn't mean anything. They need to do that year upon year and collect trophies to compete with United. That's the true test. They're not serial winners. United are and that's why players want to be there.

"With the Champions League around the corner, this is a huge boost. Sanchez hasn't come to Old Trafford not to play. He's come to show how good he is, on the top stage, which is Europe. He's a special player and the sort that doesn't come around that often, and I'd say United's hopes of winning their fourth European trophy have just got a lot more likely."

Ince – a two-time Premier League winner at Old Trafford – added: "We all presumed Sanchez would join Man City. There was all this talk about how desperate he was to be reunited with Pep Guardiola from their Barcelona days.

"Suddenly, Man United is the destination for him, and that is a massive statement from the club. He's one of the best players in the Premier League, and they've had a lot of competition to sign him.

"This is their way of saying: 'Don't belittle us. We're still the biggest club in the league and we can get who we want.'

"It seems United, City, Liverpool and Chelsea were all after him. Sanchez choosing United sends a big message to those clubs, especially Man City."