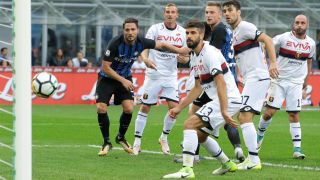 Danilo D'Ambrosio was the unlikely hero for Inter as they battled to a 1-0 win at home to nine-man Genoa in Serie A on Sunday, moving two points behind leaders Napoli and Juventus.

Luciano Spalletti's men won their first four matches of the new campaign, but after drawing with Bologna on Tuesday they seemed to have failed to break a stubborn Genoa side down at the San Siro until D'Ambrosio's decisive late impact.

Marcelo Brozovic struck the post for Inter in the last minute of a lacklustre first half and Genoa had narrowly been the better of the two sides before the break.

The visitors had plenty of chances of their own to win it, teenage forward Pietro Pellegri wasting the best of their opportunities with a diving header from Davide Biraschi's right-wing cross.

But Genoa's resistance crumbled from a basic set-piece with three minutes to go, D'Ambrosio rising highest to nod in Joao Mario's deep left-wing corner, then Stephane Omeonga and Adel Taarabt were both dismissed as Ivan Juric's men lost all composure in the closing moments.

Spalletti has continually played down his side's Scudetto chances but, on this evidence, they could challenge for a first Serie A title since 2009-10.

Inter wanted a response after the disappointment of dropping their first points of the season against Bologna and Ivan Perisic almost gave them the lead in the first minute, but the winger's dipping volley landed on the roof of the net.

The hosts were struggling to get going and they were indebted to captain Mauro Icardi for a fine challenge on Pellegri, the striker tracking back into his own box to deny the 16-year-old.

Pellegri had an even better chance after 38 minutes but, with Milan Skriniar stretching to clear, the teenager took his eye off the ball and sent his diving header wide of the post.

Taarabt was pulling the strings for Genoa and the Moroccan forced a fine save from Samir Handanovic, the Inter goalkeeper diving to his left to turn the drive away.

That warning shot seemed to wake Inter up and they struck the woodwork moments before the break as Brozovic beat Mattia Perin with a 20-yard strike, only to be denied by the goalkeeper’s left-hand post.

Chances continued to flow after the interval, Omeonga making excellent ground and cutting inside off the right flank to cross for Diego Laxalt, who fired a first-time shot over the crossbar.

Spalletti turned to Eder on the hour mark, the Italy international replacing Antonio Candreva, but Genoa remained firm at the back, Perin beating away Brozovic's drive.

Perin saved again from Brozovic after 69 minutes, before the suddenly busy goalkeeper tipped away a ferocious Eder shot.

As the game opened up Handanovic had to be alert to deny Omeonga and the opening goal finally arrived with three minutes to go.

Joao Mario's corner reached D'Ambrosio at the back post and the defender nodded the ball across goal to break the deadlock for his side.

Genoa had deserved a draw on balance but they ended the game in disarray with two quick red cards as Omeonga was sent off for dragging down Eder with the striker through on goal, before Taarabt saw red for a horrible challenge on Yann Karamoh.