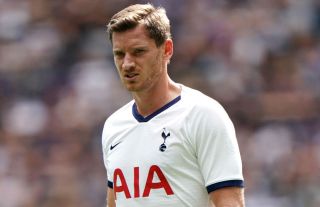 Inter signed Vertonghen's teammate Christian Eriksen, who had six months left on his contract, in January for a fee of around £17m.

Eriksen was another Tottenham contract rebel, who felt his time at the north London club had run it's course.

Inter have made a habit of buying players from the Premier League of late with ex-Chelsea boss Antonio Conte raiding the league he left in 2018.

In addition to Eriksen, the Nerazzurri have signed Romelu Lukaku and Ashley Young from Manchester United, as well as Victor Moses from Chelsea.

Conte is now keen on reinforcing his central defence, especially if he loses Milan Skriniar, who is a rumoured target for Manchester City.

According to the Evening Standard, Inter have already made contact with Vertonghen's representatives over a possible move.

The Belgian centre-back is free to discuss terms with any potential suitor considering he is in the final six months of his contract.

It's believed that Spurs boss Jose Mourinho is keen for Vertonghen to renew his contract at the club.

However, despite discussions, there is understood to have been little to no progress made between the parties.

Vertonghen has recently lost his place in the starting eleven at Spurs, with Toby Alderweireld and Davinson Sanchez becoming Mourinho's preferred pairing.

The 32-year-old's agent Tom De Mul has commented on the negotiations, saying there's still a chance his client stays.

"We haven’t reached an agreement as yet, but we don’t rule out anything.

"There’s interest in him as a free agent, but Spurs is a very interesting option for us. The door’s still open."