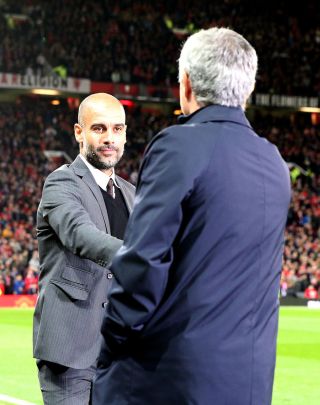 Pep Guardiola expects it to take time before Tottenham begin to play in Jose Mourinho’s image.

Manchester City manager Guardiola and Mourinho renew a long-time rivalry as the champions travel to Spurs in the Premier League on Sunday.

Mourinho returned to the game after almost a year out when he took over at the London club last November following the sacking of Mauricio Pochettino.

Results have so far been mixed and, while Guardiola admits he has seen little of Spurs, he thought Mourinho would need a while to make his mark fully.

Guardiola said: “I saw this morning one game and a half, before then just highlights, I couldn’t say more than that.

“But everyone knows about him and about his personality as a manager. When you take over a team during the season it’s not easy to change things or instil something because you don’t have time to train.

“It’s difficult for people who have been there three, four years to train, review and add something.

"I don't think it will be a problem for him to play some minutes."— Tottenham Hotspur (@SpursOfficial) January 31, 2020

“You always need time but we’ll see in the future.”

City go into this weekend’s game after reaching the final of the Carabao Cup final in midweek. Their passage was not clear, however, as they were beaten in the second leg of their semi-final by Manchester United.

That game on Wednesday saw Guardiola deploy his little-used back three system that features only one specialist centre-back and two full-backs.

Guardiola did not give anything away when asked if he would play with the same formation this weekend.

Speaking at a press conference, he said: “I have an idea. I saw their games – well one game especially – and I’ve an idea but I’m not going to tell you.

“There was a reason why I played like that on Wednesday. I explained to the players.

Guardiola and Mourinho had an intense rivalry when they were in charge at Barcelona and Real Madrid respectively. They came up against each other again in Manchester in 2016 when they took over at City and United.

Yet while their careers have intertwined, Guardiola insists it is not something he gives much thought.

He said: “I think with him or without him I try to do my best. When we faced in Madrid or here it’s because he has top teams, so I have to learn what he does.

“But without him, I think I would have done the same. It would have been another rival.”