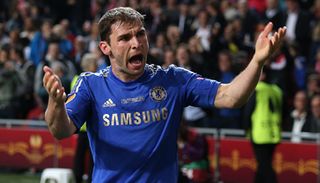 The Serbian defender headed a stoppage-time winner from a corner to secure a second successive European trophy for the Premier League side after they won the Champions League for the first time last season.

APP:Europa League stats on Chelsea 2-1 Benfica at your fingertips with FREE Stats Zone

"This team deserved this, because we have had a very difficult season and a lot of games," Ivanovic, suspended for the 2012 showpiece which Chelsea won after a penalty shootout victory over Bayern Munich, told ITV.

"In the end, today was a very hard game and Benfica played very well. But we scored from set pieces and work very hard preparing that part of our game. We deserve that trophy.

"It was a great feeling to play a final, another European final for us as a team and a great win for us. Now it is time to celebrate."

Chelsea were playing their 68th game of a marathon season and were only in the Europa League after dropping into it after becoming the first Champions League winners to be eliminated in the group stage the following season.

"No-one deserves this more than Ivanovic - he has been fantastic," he said. "You make your own luck, and we stick together in this group. The club deserves it."

Chelsea had led through a fine Fernando Torres goal just before the hour, the Spaniard rounding keeper Artur to fire home. Benfica, who had been the better side in the first half, levelled from the penelty spot nine minutes later through Oscar Cardozo.

"I am very happy. It was a very tough game, and Benfica were much better in the first half," the Spaniard said.

"The first half was not good enough at all. We really wanted to win this Europe League, and maybe this was going to be our only chance."

Beaming interim manager Rafael Benitez, taking charge of the Londoners for the penultimate time before he steps down at the end of the season, praised Chelsea's improved efforts after the break.

"That was a great performance in the second half, against a very good team. I'm really pleased for the players and everyone involved," said Benitez, who won the Champions League with Liverpool during his time in charge at Anfield.

"We didn't have the legs in the first half, so we had to adapt. They players have worked so hard, all season. I am proud - it was not easy. I'm really pleased, really proud."