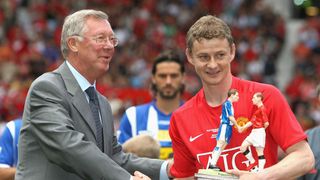 Ole Gunnar Solskjaer will take cues from his mentor Alex Ferguson if his thinks Manchester United's players are not pulling their weight.

The former Old Trafford favourite has already cut a contrast to predecessor Jose Mourinho in the days since his surprise appointment as caretaker manager, with the sunny demeanour of a 45-year-old who feels he has come "home" a constant in his media engagements.

Solskjaer has also repeatedly referred to the influence of his former boss Ferguson and insists this extends to disciplining players who do not meet the mark.

"We're all different in how we manage people, and [Ferguson] was different to every individual. Maybe I should get the hairdryer out of my pocket, because I've got a hairdryer!" he joked, recalling the nickname for the infamous dressings down dished out by managerial great Ferguson.

"When my hair needs lifting I use it on myself, but I'm also not afraid of laying down the law.

"But if I get disappointed... ask Noah or Karna or Elijah [Solskjaer's children], or some of the players I've had in Molde. You have to tell them the standards we've got."

Reports that Mourinho left a disgruntled dressing room behind have led to talks of a squad wielding player power at Old Trafford as was claimed when the reigns of David Moyes and Louis van Gaal also ended early.

Solskjaer's previous managerial assignment in the Premier League came at Cardiff City, where United travel on Saturday, and he acknowledges a changing role for the figurehead in the dugout in the modern game.

Nevertheless, he feels the onus remains on the manager to exercise influence over players as Ferguson did.

"I'm not sure that the power has gone to the dressing room. Football's evolving of course and the gaffer [Ferguson] was in charge of more or less the whole club," he explained.

"Football is developing, the structure of the club has developed, but the power is with the manager. He picks the team, he picks the tactics, the strategy, the philosophy is in these walls.

"So that legacy is more important than any player power, because I have to say being a part of Man United and being a Man United player is a privilege. And I think all of them want to succeed here."