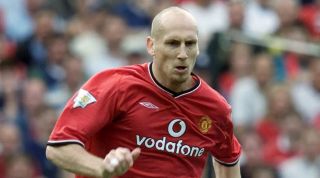 Former Manchester United defender Jaap Stam has revealed to FourFourTwo that Kevin Keegan tried to persuade him to join rivals Manchester City in 2002.

Stam has answered a broad range of readers’ questions in the July 2020 issue of FFT – a Brazil special out in shops now and available to order online with free delivery.

The centre-back was the subject of a reported £10m bid from City in 2002, just a year after his shock Old Trafford departure for Lazio, and the Dutchman has described being starstruck during a chat with Citizens boss Keegan.

“I remember it well when he called me – I was taken by surprise, because he was such a big player when I was growing up,” Stam told FFT.

“I remember there even used to be Keegan comics, so it was quite special talking to him on the phone.

“City were trying to grow as a club and had heard about the financial problems at Lazio. But I didn’t join them in the end, as City weren’t like the team they are today. Deep down I also felt that I couldn’t go anyway, as I’d played for United.

“At Lazio, there was interest from other top Italian sides including Juventus, Milan and Inter every year. They didn’t want to sell me in the first two years, but in the third season I said, ‘I really want to make it happen now’. They granted my wish and then I signed for Milan.”