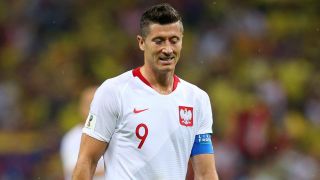 Adam Nawalka's side have endured a disappointing campaign in Russia, with back-to-back defeats to Senegal and Colombia meaning they cannot progress to the last 16.

Lewandowski has cut a particularly frustrated figure and has yet to get on the scoresheet, despite having struck 16 times in just 10 appearances in qualifying.

But Nishino, whose side need only a point to guarantee their place in the knockouts, is wary of underestimating their opponents' determination to bow out of the competition on a high.

"There's no such thing as a consolation match," he told a news conference. "I'm sure Poland would like to play for pride, and there's Lewandowski, a world-class striker. I'm sure he'll come out to try to score a goal.

"Poland qualified from Europe, which is very tough, but we had two very tough matches and still earned points. That's given us confidence. There might be some issues with the conditions but we want to keep hold of the ball as much as possible and continue with Japanese football.

"We don't think Poland are indestructible. We'll get hold of the ball, move the ball, be agile and quick and play towards their goal."

Temperatures in Volgograd are expected to surpass 40 degrees Celsius but Nishino does not think his players will suffer particularly badly from fatigue.

"When I landed yesterday, I was surprised how humid it was," he admitted. "It was probably more than I expected. However, I don't think the team's physical condition is much affected by it. We've had pretty good results so far, so the players don't feel that tired.

"Poland is full of good players, starting with Lewandowski," he said. "As a team, they're very organised and at the centre is Lewandowski. We need to mark him well.

"As a group, we'll need a very good defence. I hope there will be no opportunity for him to take a penalty!"