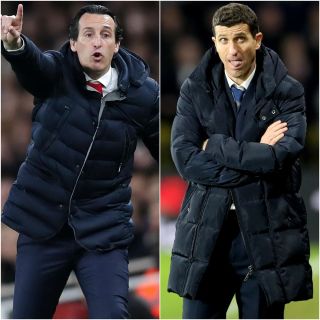 Arsenal head coach Unai Emery has revealed he was sat in his hometown with Javi Gracia discussing the upcoming match against Watford when the Hornets sacked the Spaniard.

Despite reaching the FA Cup final less than four months ago, Gracia lost his job at Vicarage Road after a run of seven defeats in 10 Premier League games and with Watford bottom of the table this term.

Arsenal are the visitors on Sunday but it will be the reappointed Quique Sanchez Flores in the dugout opposite Emery as he returns to the club he left in 2016.

Emery is a close friend of Gracia, the former Watford boss was the first person he called when offered the Arsenal job in 2018, and the two men – alongside their coaching staff – often dined together.

But it was a chance meeting in Spain last Saturday which led to Emery being on hand when Gracia’s news was revealed.

“It’s amazing,” said Emery. “I met him, we found each other last week in my town, in Hondarribia, when I was there with my family.

“I was walking and in front of us was Javi Gracia. And in the moment we started speaking about our match, and we finished it knowing he was sacked. It’s a good story, yes?”

Emery has also backed Gracia to return to work before too long, adding: “He is a very good coach, as he showed last year in Watford.

“The club decided, and I have to respect that. He is going to work and he is going to continue his career like he is, like a great coach.”

While he does not have the same relationship with Flores, they have faced each other on plenty of occasions.

Emery recalls when the pair met in the Europa League quarter-final in 2010, his Valencia side losing to Atletico Madrid – who went on to lift the trophy under Flores.

“I remember it,” he said. “Every coach, every player, every person in football remembers some things. I remember we drew 2-2 at home and we drew 0-0 away.

“In the last minute the referee did not give us an amazing penalty for the opportunity to win. In my way, everything that happened to me is something to learn from, for experience.

“Sometimes it’s positive, at the moment more positive, but also negative. I learned from it all.”