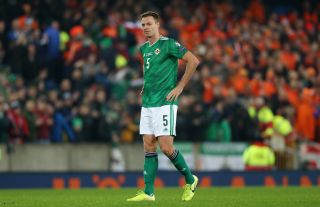 Jonny Evans has not travelled with Northern Ireland ahead of their UEFA Nations League match against Romania on Friday.

The squad flew out to Bucharest on Thursday afternoon ahead of Ian Baraclough’s first game in charge since he succeeded Michael O’Neill in April.

But Leicester defender Evans was not in the travelling party, dealing a further blow to Baraclough, who is already without Sunderland defender Tom Flanagan.

Ballard, who played for the Under-21s under Baraclough, was called up by O’Neill for last year’s Euro 2020 qualifiers against Estonia and Belarus but is yet to make his senior debut.

After Friday’s match, Northern Ireland will return to Belfast ahead of Monday’s game against Norway.