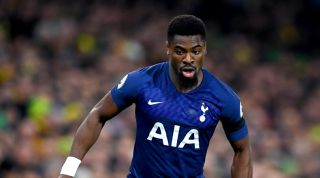 Mourinho was appointed as Mauricio Pochettino's successor in November with Spurs 11 points adrift of the top four.

The gap now stands at nine points after a poor run of form which has seen Tottenham win just one of their last five Premier League games.

But Aurier says Mourinho's track record speaks for itself and has called on his team-mates to trust in their manager.

"He has won so many trophies and everyone wants to follow this way,” he told the Daily Telegraph.

“When the big manager comes in and you see his CV and it’s win, win, win, win, of course in the players’ minds something changes."

Aurier has been a regular starter under Mourinho, having appeared to be on the verge of the exit door at Tottenham last summer.

The Ivory Coast international is relishing regular first-team minutes, and also believes he has learned from various off-field mistakes.

Aurier made homophobic comments about Laurent Blanc and Zlatan Ibrahimovic during his time at PSG, while he was also given a two-month suspended jail sentence for elbowing a police officer in 2016.

"Of course, I regret my mistakes because it is not me,” he added. “My family, when we talked about this, they said ‘it’s not you’. They said they couldn’t understand because it wasn’t me. Now I know to be careful.

“I made mistakes because I was young, now I’m better, I have a daughter and my life has changed. In England, people are only interested in my football and it’s better for me."

Tottenham will again be without star striker Harry Kane when they face Watford on Saturday.

And Aurier accepts that Spurs' top-four ambitions will be harmed by his absence, with the England captain ruled out until April at the earliest.

“We lost the best striker in the league,” he said. “When we play with Harry it’s easy because he scores a lot of goals.

"Now it’s very difficult for the team because the manager wants to change something, use new tactics and we need to adapt quickly.”