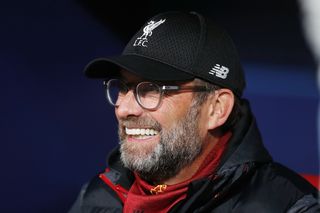 Jurgen Klopp’s Liverpool can’t stop winning league matches and it’s not only his rival managers who are finding it too much to bear.

A young Manchester United supporter called Daragh had grown so frustrated at Liverpool’s success that he decided to contact the man responsible for it directly.

Klopp’s response to Daragh’s letter has since been doing the rounds on social media, with many praising the Liverpool manager for taking the time to craft a considered reply.

“As much as you want Liverpool to lose, it is my job to do everything I can to help Liverpool to win as there are millions of people around the world who want that to happen so I really do not want to let them down,” wrote Klopp.

“Luckily for you, we have lost games in the past and we will lose games in the future because that is football. The problem is when you are ten years old you think that things will always be as they are now but if there is one thing I can tell you as 52 years old it is that this most definitely isn’t the case.

“Having read your letter though, I think I can safely say that one thing that will not change is your passion for football and your club. Manchester United are lucky to have you.

“I hope that if we are lucky enough to win more games and maybe even lift some more trophies you will not be too disappointed because although our clubs are great rivals we also share a great respect for one another. This, to me, is what football is all about.”

Having won 25 of their 26 league games, drawing the other against Man United at Old Trafford, Liverpool are a scarcely believable 22 points clear at the top of the table.

It’s 30 years since they last won the league title, but now it’s surely only a matter of time until that run ends. Many United supporters, Daragh included, are desperate for Klopp’s side to suffer a defeat that simply doesn’t look like coming.

At least the 10-year-old can comfort himself with the fact that the Liverpool manager got in touch to reassure him that their incredible form won’t last forever.