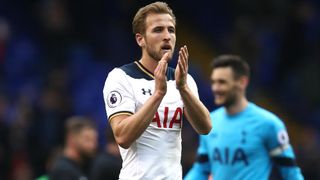 Tottenham star Harry Kane hopes his team can put the pressure on Chelsea by claiming a win over West Ham on Friday.

Mauricio Pochettino's men are just four points adrift of the Premier League leaders with four games to play this season.

A win at London Stadium would cut that deficit to one, with Chelsea not in action until Monday – when they host Middlesbrough.

Kane said playing before their title rivals was an advantage, and he hopes Spurs can capitalise.

"We just have to try to finish strong," he said.

"We've got another game Friday night and it's good to play first. Hopefully, we can drop the gap to one point and then see what happens."

Tottenham are on a nine-match winning run in the league, including a 2-0 result over Arsenal last time out.

Spurs were also in title contention last season before a poor finish to the campaign saw them end up third and 11 points behind eventual champions Leicester City.

"We knew what it was like last year with Leicester playing before us. It is difficult," Kane said.

"It is good to try to play first and try to put that pressure on, so it will be good to play on Friday night.

"It is another tough game away from home but hopefully we can get that win, put that pressure on and wait and see."