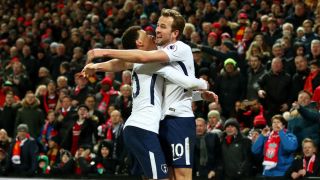 Tottenham's Harry Kane scored his 100th Premier League goal in extraordinary fashion on Sunday, netting a penalty in injury time to earn a 2-2 draw at Liverpool eight minutes after missing the chance to win the match from the spot.

Only Alan Shearer (124) has reached the milestone in fewer games than Kane (141).

Having trailed to Mohamed Salah's third-minute opener at Anfield, Spurs equalised courtesy of a stunning long-range strike from Victor Wanyama in the 80th minute.

With three minutes remaining in normal time, Kane steered a tame penalty straight at Loris Karius in the Liverpool goal and then watched on helpless as Salah netted a stunning second at the opposite end of the field, seemingly snatching back all three points for the Reds.

A final twist afforded Kane a second opportunity from 12 yards out to bring up the personal milestone, though, referee Jonathan Moss awarding another penalty against Virgil van Dijk for a foul on Erik Lamela.

This time Kane made no mistake, picking out the bottom corner in the 95th minute to make it 2-2 and cap off a remarkable conclusion to the contest.

100 goals – congratulations from everyone at the Club to on a magnificent achievement. February 4, 2018

In doing so Kane reached the important landmark of 100 Premier League goals, the 24-year-old having emerged from a succession of lower-league loan moves to become one of the deadliest marksmen in Europe and a crucial player for Spurs and England after exploding into life with 21 league goals in the 2014-15 season.

He bagged 25 a season later as Tottenham narrowly missed out on the title to Leicester City, plundered 29 goals last term and already has 22 in 2017-18, prompting speculation Kane could be a target for the likes of LaLiga and Champions League holders Real Madrid.