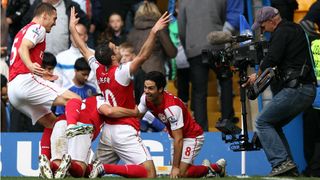 Chelsea host Arsenal at Stamford Bridge on Sunday in the latest instalment of one of the Premier League's heavyweight fixtures.

Antonio Conte's champions appear to have put their shock opening-day defeat to Burnley behind them by reeling off three consecutive victories domestically and thumping Qarabag 6-0 in the Champions League.

The intervening weeks plunged the Gunners into all-too-familiar turmoil, with a 4-0 thumping at Liverpool and the Alexis Sanchez transfer saga bringing the vitriol that simmered at Emirates Stadium last season back to the surface.

Wenger, buoyed by beating Bournemouth 3-0 and a 3-1 Europa League comeback win against Cologne, has known joy and heartache at Stamford Bridge over his lengthy tenure and here we look at some of those extremes.

Chelsea were playing with increasing authority as champions-elect but Conte still had an itch left to scratch. A 3-0 humbling at Emirates Stadium the previous September forced a pivotal re-think of Chelsea's tactics, with the Italian's favoured 3-4-3 formation paying instant dividends.

At Stamford Bridge, Arsenal were forced to contend with the monster they created. Marcos Alonso's robust aerial challenge on Hector Bellerin allowed him to net the opener and infuriated Wenger before Eden Hazard's majestic solo goal in the 53rd minute left little doubt over the destination of the points. Cesc Fabregas capitalised on an error from Petr Cech to pile on more misery for his former club, meaning Olivier Giroud's late header was scant consolation.

Wenger's 1,000 game in charge probably still stands as his darkest day at Arsenal. "We came to kill and, in 10 minutes, we destroyed," said his nemesis and then Chelsea boss Jose Mourinho. At that stage it was 2-0 and by the 17th minute Arsenal were 3-0 down and reduced to 10 men.

Hazard scored Chelsea's third from the spot, Samuel Eto'o and Andre Schurrle having dealt the initial blows, after Kieran Gibbs was sent off due to a case of mistaken identity with Alex Oxlade-Chamberlain. There could be no question whatsoever over the identity of the superior side as Oscar scored either side of the break and Mohamed Salah netted the first goal of his brief Chelsea career.

While Wenger might have been tormented before and after by one Portuguese Chelsea boss, he sent the fledgling career of another racing towards an early conclusion with this Robin van Persie inspired win.

Great things were expected of Andre Villas-Boas at Stamford Bridge but his Chelsea tenure never truly recovered from this remarkable loss. The hosts led through John Terry and Frank Lampard before Juan Mata put them back on terms following fine second-half finishes from Andre Santos and Theo Walcott.

But Van Persie, who scored Arsenal's initial equaliser, capitalised on Terry falling face first to round Petr Cech in the 85th minute and rifled past the wrong-footed Chelsea goalkeeper in stoppage time.

Villas-Boas was out of the door the following February, leaving Roberto Di Matteo to lead them to unlikely Champions League glory.

Long-before Van Persie's treble turned a Stamford Bridge encounter on its head, Nwankwo Kanu broke Chelsea hearts with a hat-trick of his own. The idiosyncratic Nigeria striker produced a heroic 15-minutes with Arsenal 2-0 down courtesy of Tore Andre Flo's first-half header and Dan Petrescu's thudding conversion of Graeme Le Saux's cross after the break.

As both teams grappled with a sodden pitch, Kanu turned on Marc Overmars' pass to prod into the corner for his first. There was a quarter of an hour to play at that stage and the same Arsenal combination saw the rangy forward crash home an equaliser.

Kanu saved the best until last – charging down right-back Albert Ferrer's clearance and finding Chelsea goalkeeper Ed De Goey out of his ground on the right. He bundled around the Dutchman and clipped a finish over Marcel Desailly and Frank Leboeuf on the line from an improbable angle.