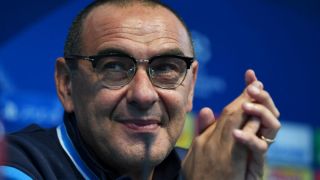 Maurizio Sarri's long-anticipated appointment as Chelsea head coach was confirmed on Saturday, a day on from Antonio Conte's Stamford Bridge exit being rubber-stamped.

Chelsea's sixth Italian boss has promised attractive football and trophies, having supplied plenty of the former while falling just short in pursuit of the latter during three acclaimed seasons at Napoli.

However, he finds a Chelsea squad bloated by the uninspiring signings of last season – the state of flux heightened by speculation linking star names to moves away from Stamford Bridge.

A Wembley date against Manchester City in the Community Shield is just three weeks away and Sarri has these issues and more to be getting on with.

Reports linking mercurial Belgium forward Eden Hazard to Real Madrid have hummed away in the background for a number of years and the volume has ramped up in the days following Cristiano Ronaldo's stunning switch to Juventus. The 27-year-old has enjoyed a fine World Cup and international team-mate Thibaut Courtois also boasts admirers in the Spanish capital. Losing one of Hazard or Courtois would be a seismic blow; losing both might make Chelsea's season unsalvageable before it has begun.

Pinching his faithful Napoli servant Jorginho from under Manchester City's noses undoubtedly counts as a significant early coup for Sarri. But will it be enough to placate Hazard? "I'm waiting for new players next season. You know. We'll see. I want good players, because I want to win the Premier League next season. A lot of things [can happen], then we will see," he said in May.

Hazard's arrival in 2012 arguably marks the last time Chelsea landed a transfer market A-lister. Roman Abramovich's reign is certainly a different one to the days of plenty a decade ago. It is time to roll back the years and back Sarri, or face the consequences.

Gonzalo Higuain performed well in his first two seasons under Rafael Benitez at Napoli, but remained the man who was back-up at Real Madrid and missed chances in major finals for Argentina. Under Sarri, he went nuclear, netting an astonishing 36 goals in 35 Serie A appearances in 2015-16. That Napoli continued to flourish after those performances allowed Higuain to jump ship to Juventus speaks volumes for Sarri's pedigree, while the prospect of him rebuilding the talented but fragile Alvaro Morata in similar fashion is one Chelsea fans will pray comes to pass.

13 - Alvaro Morata has scored his first goal for Chelsea since December 2017 (v Brighton), ending a run of 13 games in all competitions without one. Required. March 18, 2018

Give youth a chance

Chelsea boast the best academy system in England and it's not even close. They have won each of the past five FA Youth Cups and seven of nine. Yet the impact on the first team has been negligible in the extreme. This season, the sight of Danny Drinkwater and Ross Barkley sitting largely unused as Ruben Lofus-Cheek was farmed out on loan to Crystal Palace and won a place in the England World Cup squad was embarrassing. The feelgood factor around Gareth Southgate's youthful national side will only increase the clamour for Sarri to give Chelsea's lavishly gifted young stars their head.

34 - Ruben Loftus-Cheek completed every single pass he attempted for England in the game against Costa Rica tonight (34/34). Control. June 7, 2018

Chelsea's appointment patterns during the Abramovich era are now well established. Appoint a winning pragmatist such as Jose Mourinho or Conte; win things but pine for a more attractive style; appoint a stylist such as Andre Villas-Boas or Luiz Filipe Scolari and sack them at the first sign of trouble before returning to a pragmatist – usually via a Guus Hiddink temporary spell. Sarri undoubtedly falls into the stylist category. History tells us the clock is ticking already.