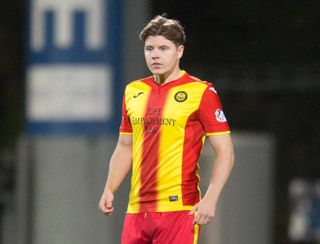 Kevin Nisbet netted a hat-trick as Hibernian extended their perfect start to the season with a comprehensive 4-1 victory at Livingston.

A double from Nisbet and another from Christian Doidge had Jack Ross’ side three goals ahead by half-time.

Livingston narrowed the gap via a Lyndon Dykes penalty but Nisbet claimed the match ball by rolling in a spot kick of his own two minutes from time.

Livingston made two changes from the side beaten by St Mirren on the opening day of the season. Out dropped Alan Forrest and Aaron Taylor-Sinclair, replaced by Scott Robinson and Ciaron Brown.

Hibs also made two switches following their victory over Kilmarnock. In came Doidge and Daryl Horgan, with Scott Allan dropping to the bench and Drey Wright missing out through injury.

The first chance of the game went the way of the home side. Dykes did well to fizz a ball across the six-yard box for Robinson who could not steer his shot inside the near post.

Doidge then could have marked his return to the side with a goal but glanced his header from Joe Newell’s cross wide of target.

His strike partner, though, would fare better after 15 minutes. Horgan fired in a cross from the left that the Livingston defence fared to clear, giving Nisbit a chance for a tap-in for his first Hibs goal following his summer move from Dunfermline.

Hibs continued to look the more threatening but it was Livingston who had the next chance, although Robinson’s deflected free kick lacked the pace to trouble Ofir Marciano.

Instead it was the visitors who struck again after 38 minutes with the same pair combining to good effect. Horgan’s delivery this time was floated to the back post where Nisbit rose highest to power in a header.

It was 3-0 before half-time. A Newell corner was not cleared and Hibs scrambled the ball to Doidge who tapped in at the back post for his first goal of the season.

Livingston reacted by making two changes at half-time and gave themselves a lifelong on the hour mark when they got a goal back from the spot.

Ryan Porteous was booked for hauling down substitute Matej Poplatnik and Dykes thrashed home the penalty for his side’s first goal of the season.

Nisbet completed his hat-trick from the spot late on after Marvin Bartley had fouled Newell in the box.