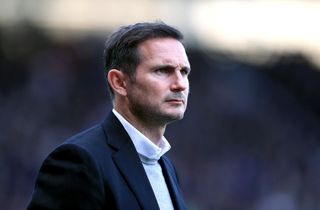 Derby boss Frank Lampard has criticised the “incredible” decision to overturn a penalty for his side during their 1-0 Sky Bet Championship play-off defeat to Leeds.

The Rams were given a spot-kick with 12 minutes to go at Pride Park, following a collision between Jayden Bogle and Jack Harrison in the box.

78’ Drama at Pride Park. Bogle goes down in the area under a challenge from Harrison. Referee awards a penalty before speaking to his linesman and ruling it out pic.twitter.com/ZorEDqgiWI— Leeds United (@LUFC) May 11, 2019

Leeds led at the time through Kemar Roofe’s 55th-minute strike – a goal that was ultimately enough to see Leeds leave Pride Park with the win.

“I think it was a close call for the penalty, but for it to be overruled by a linesman who is further away than the referee is incredible,” Lampard said.

“The ref is the boss and he made the decision. If it is going to change then surely it has to be because there is something clear and obviously wrong and there wasn’t.

“Contact is minimal but there is a foul there and I don’t understand why it was changed.

“We won’t get it back now but I would like to speak to the officials to understand their decision-making process.

“We were more positive in the second half and created chances, but we need to be better on the ball and be more confident on Wednesday (in the second leg).

“If we go out then I want us to play how we have been playing recently. They will put us under pressure but we have to stay confident.”

He said: “We always play to win and I think it was a deserved win. I am really pleased with the performance.

“I did not have a clear view of the penalty. We are very far away from the action and have many players in front of us, so I can’t give an opinion.”

The Argentinian pointed to events elsewhere this week as good reason not to take anything for granted.

“The Champions League games this week are a warning of what could happen,” he added. “A 1-0 lead is not enough to be comfortable going into the second leg.