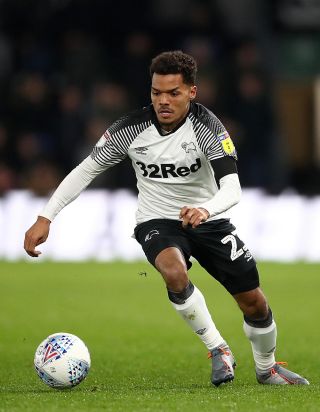 Duane Holmes’ stoppage-time equaliser earned Derby a 2-2 draw and prevented Middlesbrough from making it five Sky Bet Championship wins in a row at the Riverside Stadium.

The Rams twice came from behind to secure a point and extend Wayne Rooney’s unbeaten start with the club to three games.

Boro midfielder Lewis Wing opened the scoring in the 16th minute but Derby fought back after the restart, and there was more than a hint of good fortune about their equaliser when Jason Knight’s deep cross dropped straight in after 54 minutes.

The home side regained the lead through Paddy McNair’s penalty with 24 minutes remaining, but Holmes pounced to snatch a draw that has done little to help either team’s push to climb in to the top 10.

Middlesbrough had already shown danger signs in the opening exchanges when Wing wriggled free of his marker to head a corner wide of the far post.

There was also an effort from top scorer Ashley Fletcher that flashed wide after teenager Djed Spence had played him in after shrugging Rooney off the ball.

The opening goal arrived soon after, however. Patrick Roberts, lively throughout on his first league start since joining on loan from Manchester City, controlled and passed to Marcus Tavernier, whose lovely flick created space for Wing.

The goalscoring midfielder then arched his body and curled a brilliant finish from the right edge of the area inside goalkeeper Ben Hamer’s bottom right corner.

Boro goalkeeper Aynsley Pears had to be alert to rush off his line to deny former Sunderland striker Martyn Waghorn just after the half hour when Knight had played him in.

But Middlesbrough were the better team before and after that and almost had a second before the break when Roberts side-footed wide after he was left in space to meet Fletcher’s pass into the area.

A failure to deliver a second at that stage left the door open for Derby, who moved Rooney into a more forward role, to make a strong start to the second half and they got their rewards nine minutes in.

Knight was looking to deliver a deep cross into the area but it caught everyone out, including goalkeeper Pears, and the ball bounced in off the far post.

Wing curled a shot into the arms of Hamer before the dangerous Roberts worked his way into the area, only to be brought down by defender Matt Clarke.

McNair, filling in at centre-back these days because of injuries, struck the resulting penalty inside Hamer’s right-hand post to put Middlesbrough ahead again in the 66th minute.

Both teams had their moments after that but it was Derby and Holmes who had the last laugh when he volleyed in from 25 yards to earn a point.