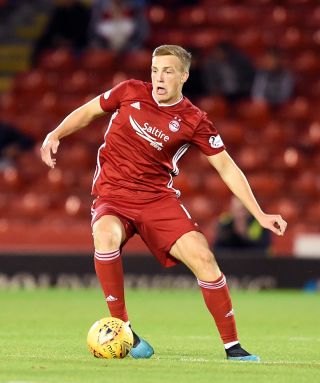 Aberdeen midfielder Lewis Ferguson believes nothing more than victory at St Mirren on Sunday will make up for the midweek Motherwell mishap.

Dons fans were far from happy with the 1-0 defeat to the Steelmen at Pittodrie on Wednesday night.

Aberdeen lost 1-0 earlier in the season in Paisley and he wants retribution.

Ferguson told the club’s official website: “The only thing we can do is bounce back with the three points.

“I don’t think anything else will go down nicely.

“We have prepared well, hopefully everybody has recovered well and we will be raring to go.

“It will be a tough game. Every game in this league is tough.

“The last time we went down there was after a European game and I don’t think we were at 100 per cent and we suffered a sore one.

“Hopefully we can go and get the three points.”

Ferguson believes his form this season has mirrored that of the team.

The former Hamilton player said: “My season has been okay; it has been pretty steady.

“It has been the same as the team really, we have not got going yet, and we need a bit of a spark to kick-start something and maybe go on a run of games. Hopefully Sunday can be that game.

“There have been good performances here and there. We are wanting to get that consistency over a period of time.

“It has not been good enough. If we want to go and finish as high in the league as possible and get European football, we need to be more consistent and go on a longer unbeaten run.”

The 25-year-old, who signed a pre-contract with the Dons last week, joins the club on a three-and-a-half-year deal and goes straight into the squad for the match against St Mirren.

McInnes said: “I’m pleased we managed to reach an agreement with St Johnstone to bring Matty to the club now.

“He is the type of player who can really help make the difference for us.”