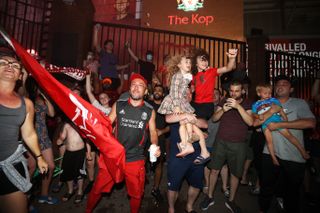 Liverpool’s 30-year wait for a league title is over after they were confirmed as Premier League champions.

Second-placed Manchester City had to win at Chelsea to prolong the Reds’ wait for at least another week but fell to a 2-1 defeat on Thursday night.

It means Jurgen Klopp’s side have won the title – the club’s first since 1990 – with a record seven games to spare.

Liverpool’s remarkable league campaign has seen them win 28 of their 31 fixtures.

They can break City’s Premier League record of 100 points for a campaign if they go on to win five of their remaining seven matches.

The Reds’ title success is the 19th in the club’s history, moving them one behind Manchester United’s English record.

Liverpool will take to the field for the first time as champions on Thursday, when they travel to Man City.

Kenny Dalglish, who won three league titles as Liverpool manager, told BT Sport: “I think back then if you’d have said it would take 30 years you’d have been arrested and sectioned, but sometimes things happen.

“The last two years since (manager) Jurgen (Klopp) came in, it has been very, very positive all the way. He’s been fantastic and he epitomises everything that Liverpool stands for. He respects everyone at the club.

“It’s not just a one-off as last year they came within a point of it and won the European Cup and a World Club Cup too, so onwards and upwards and I think there will be plenty more days to look forward to as long as Jurgen is there.

“It takes a fantastic dressing room to win things. You don’t win anything with division, it takes solidarity, and Liverpool from top to bottom have been together.”

Dalglish continued: “It takes hard work to dominate the English league when you’ve got sides of the quality of Manchester City, but Manchester City’s problems have always been across the back four, I think, and they have missed Vincent Kompany and I don’t think they have replaced him. They need a replacement for him but they have some fantastic players and they are going to lose another of their best ones in (David) Silva.

“But there are a lot of great teams – Chelsea and Manchester United are kicking on for next year – so I don’t think you can dominate easily.

“There’s no arrogance or big heads in the dressing room, no Jack The Lad who thinks they are bigger or better than anyone else.

“I remember Bob Paisley said once after the European Cup win in Rome that he didn’t want a drink, he wanted to get drunk on the occasion and the atmosphere and remember it, but (holding up a glass of Champagne) I never took your advice, I’m sorry.”

“This was a season for the ages and for the faithful of Liverpool Football Club,” the American, head of Fenway Sports Group, tweeted.

“It has been an incredible year of magnificent achievement culminating tonight in capturing the Premier League title.

This was a season for the ages and for the faithful of Liverpool Football Club. It has been an incredible year of magnificent achievement culminating tonight in capturing the Premier League title.— John W. Henry (@John_W_Henry) June 25, 2020

“This in addition to winning a European championship, a Super Cup and a world championship – the totality of this accomplishment has brought respite and joy to so many in a year filled with so much tragedy.

“It is said, ‘We are Liverpool’. You, the supporters are Liverpool in every sense and you continue to drive the club forward – a historic club making history once again.”

Manager Klopp told Sky Sports News: “I have no words, it’s unbelievable. It’s much more than I ever thought would be possible, becoming champion with this club is absolutely incredible.”

He added: “It was really tense, the 95 or 100 minutes of the City game, as you can imagine. I didn’t want to be involved really but obviously as you’re watching you are involved.

“But it was an incredible achievement of my players, what they did over the last two or three years is exceptional and a huge joy for me to coach them.”

Manchester City manager Pep Guardiola told BT Sport: “Of course a big congratulations to Liverpool for this great season and the title they have won.

“We were not consistent like the previous seasons and, after 30 years not winning the title, Liverpool had incredible focus on every game and played like it was the last game and in the beginning we did not play that way.

“When they take that advantage, the pressure on us is bigger, but we can not forget we are second in the league so we are better than a lot of teams.

“Two years ago we were 25 points in front of Liverpool so after two season they catch up. They have more than 20 right now so we must try to reduce it.”