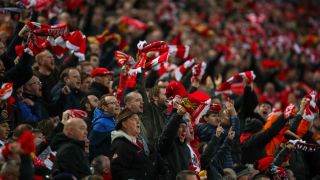 UEFA has fined Liverpool €8,000 for the club's part in the incidents that marred the build-up to the first leg of the Champions League semi-final against Roma in April.

Last month, it was announced that Roma had been fined €50,000 for their part in the trouble, with Liverpool fan Sean Cox suffering serious head injuries following an attack outside Anfield.

The Serie A club were also banned from selling tickets for their next two European away games, the second suspended under a probationary period.

Liverpool were reportedly given more time by UEFA to present their case, and on Wednesday the governing body announced its sanctions.

The club's fans were found guilty of "setting off fireworks, throwing objects and crowd disturbances", landing Liverpool with the relatively nominal financial punishment.

Jurgen Klopp's side won the encounter 5-2, a 4-2 defeat in the return fixture seeing them advance to the final in Kiev, where they lost 3-1 to Real Madrid.