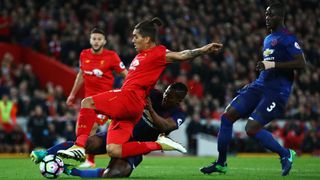 Premier League football looks set to return with a bang after the international break, as Liverpool host Manchester United in the latest instalment of arguably England's fiercest rivalry in Saturday's early kick-off.

United have been electric so far this season, getting off to a flying start which has seen them average three goals per game and collect 19 points from seven matches - it is no surprise they are joint-top with Manchester City.

After the disappointment which came with last season's sixth-placed finish in the league, Jose Mourinho appears to have United on course for a first title challenge since Alex Ferguson hung up his hairdryer in 2013.

By contrast, Liverpool have been erratic. Jurgen Klopp's men often look vibrant going forward, but they have the same old problems defensively, with only Crystal Palace (17) and West Ham United (13) conceding more goals than the Reds (12).

Nevertheless, Liverpool - even without the crocked Sadio Mane - arguably represent United's first real test of the Premier League season and will be eager to bring their rivals down a notch, hopefully resulting in another classic Premier League encounter at Anfield, much like the following examples...

Few meetings between these two rivals have been quite as action-packed as their incredible 3-3 draw in January 1994.

United were cruising within 24 minutes, as they went 3-0 up through Steve Bruce, Ryan Giggs and Denis Irwin, seemingly highlighting the gulf between the two teams at the time.

But Liverpool battled back, with the off-form Nigel Clough – then one of their most expensive signings at £2.3million – silencing some of his critics with a well-taken brace before the break.

Scoring one own-goal is rare enough; scoring two of them in one match is almost unheard of. But that is what Reds legend Jamie Carragher managed in September 1999.

Carragher put United ahead early on with his first, glancing a Ryan Giggs cross past Sander Westerveld, before Andy Cole doubled their lead.

Sami Hyypia pulled one back, but again Carragher was left red-faced, as Rigobert Song's clearance crashed against him and beat Westerveld.

For much of the first decade of this century, Liverpool's record at home to United was poor. That was until they ended something of an Anfield hoodoo in September 2008.

And Ryan Babel – remembered for little else during his time at Liverpool – struck a late winner to complete Liverpool's comeback.

Nemanja Vidic was then sent off for a second booking and Liverpool picked up their first home win over Ferguson's men for seven years.

Liverpool's 3-1 win over United at Anfield in March 2011 will probably go down as Dirk Kuyt's most memorable outing during his time at the club, for obvious reasons.

Luis Suarez was arguably the star of the show, with United unable to contain the Uruguayan, but Kuyt took the headlines with a hat-trick of simple finishes.

The result mattered little in the grand scheme of the season, as United went on to claim the title, but Kuyt did at least succeed in becoming the first Liverpool player to score a hat-trick in this fixture since Peter Beardsley in 1990.

Having previously revealed his intention to leave Liverpool at the end of the season, all eyes were on Steven Gerrard as he prepared for his final battle with United.

Liverpool were already 1-0 down when Gerrard came on at half-time, but a moment of madness from the captain ended his match after just 38 seconds, as he stamped on Ander Herrera and was shown a straight red card.

Daniel Sturridge's goal proved a mere consolation after Juan Mata's second of the game, with United running out 2-1 winners.