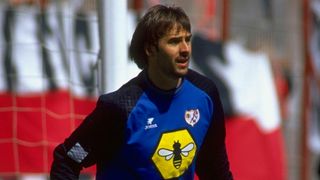 Real Madrid have found their successor to Zinedine Zidane and it came as a shock to most when Spain coach Julen Lopetegui was announced as the man to take the reins at the Santiago Bernabeu.

Lopetegui only signed a new deal to stay on as La Roja coach until 2020 in May, but the lure of taking over the Champions League's dominant force has seemingly proven too good to turn down and his new role will start after he has led Spain at the World Cup.

The 51-year-old represented Los Blancos during his playing career and now has the unenviable task of succeeding club great Zidane, who won nine trophies during two-and-a-half years at the helm.

Here, we take a look at the time of Lopetegui's career.

Born in the Basque Country, Lopetegui was a goalkeeper during his playing days, moving from Real Sociedad to Madrid's Castilla side in 1985. However, he made just one LaLiga appearance for Los Blancos before a switch to Logrones followed. His performances there earned him a solitary Spain cap in 1994 and a move to Barcelona, where he played second fiddle to Carles Busquets, father of current Spain international Sergio. He spent the last five seasons of his playing career at Rayo Vallecano.

After a stint as Spain's Under-17 assistant, Lopetegui was handed his first head coaching role at former club Rayo. However, he lasted just 10 matches in charge of the second-tier side and, after a brief spell out of coaching, would return to Los Blancos to oversee their Castilla side for a year.

Lopetegui made a return to international football with Spain, coaching their Under-19, U-20 and U-21 sides between 2010 and 2014. He was victorious at the UEFA European Under-19 Championship in 2012, before a year later steering the U-21 team to European Championship glory.

His work with Spain's youth players did not go unnoticed and Lopetegui returned to club football in May 2014 with Primeira Liga giants Porto. Despite spending big to bring the likes of Adrian, Bruno Martins Indi, Cristian Tello, Yacine Brahimi and Vincent Aboubakar to the club, Porto ended the 2014-15 season without silverware, finishing three points adrift of champions Benfica. A 3-1 defeat to Maritimo in the Taca da Liga in January 2016 proved the final nail in his coffin.

Lopetegui was heavily linked with Premier League new boys Wolves, then a Championship side, but replaced the retired Vicente del Bosque after Euro 2016. Under Lopetegui, La Roja are unbeaten and have failed to win just six of 20 matches. They finished their World Cup qualifying campaign with nine wins and one draw from 10 matches.