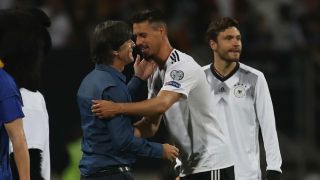 Joachim Low hailed Sandro Wagner and his young Germany team as he claimed a 7-0 win over San Marino was important for their confidence ahead of the Confederations Cup.

Wagner hit a hat-trick - his first goals for Germany - while Julian Draxler, Amin Younes, Shkodran Mustafi and Julian Brandt also got on the scoresheet in Nuremberg.

The world champions moved a step closer to the World Cup finals, but they must first tackle the Confederations Cup in Russia in the coming weeks, with Low boosted by this performance.

"It was a great opportunity to gain some confidence," he said. "The boys kept the pace up over 90 minutes.

"It was an important game for [Wagner]. He's using his body well and is not easy to defend against. He is a player with maturity and personality and one who stands by his own opinion.

"He is a very open and honest guy and he is very positive within the team."

And Wagner, making just his second appearance for the national team at senior level, was delighted that he was able to contribute and take home the matchball.

"It was a nice evening," he said. "We wanted to score many goals. I'm glad that I could contribute a small part by scoring three.

"It was awesome, my first three goals for Germany. I'm elated. [The first goal] felt great. I waited a long time for that and it was a superb cross from Joshua Kimmich.

"I have said in many interviews, that I'm very glad to play for my country. Now a goal - it's just a dream for me.

"I have to show good performances, though. If I don't score next season, I won't even be called up by San Marino."