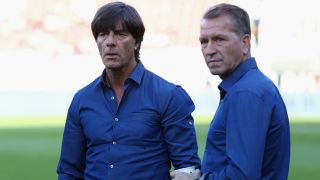 Germany general manager Oliver Bierhoff is adamant he would block any Bayern Munich approach for Joachim Low despite conceding the move is a possibility.

Low is set to lead Germany through their World Cup defence at Russia 2018 in what will be his 12th year in charge of the national team.

And the 57-year-old, who has previously expressed a desire to return to club management, is reportedly in Bayern's sights as they seek a long-term managerial appointment from next season following Carlo Ancelotti's sacking and Jupp Heynckes' arrival on an interim basis.

Bierhoff admits the departure of Low to the Bundesliga champions is not out of the question.

"Everything is possible in football. You should never rule it out," the former striker told ARD.

"He has the quality to manage any club in the world and I believe there is interest [from Bayern]."

However, Bierhoff insists he has no interest in losing Low and will attempt to convince the former Stuttgart and Fenerbahce boss to stay with Die Mannschaft.

"On the one hand, Jogi has a contract until 2020. On the other hand, if the Bavarians come looking, I will put a stop to it," the former Germany striker told Sport1.