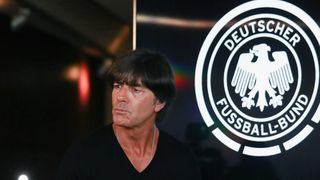 Joachim Low has lambasted a section of Germany supporters who chanted and whistled during a minute's silence ahead of Friday's World Cup qualifier with Czech Republic.

Before the Group C match got underway in Prague some German fans were heard shouting alleged Nazi-era chants, while the Czech national anthem was also targeted.

Germany's players opted not to applaud their travelling support after the 2-1 win because of the incidents, with match-winner Mats Hummels labelling those responsible as "hooligans".

Low rounded on the culprits on Sunday as he previewed Germany's next qualifying match with Norway, condemning their actions and insisting they do not represent what the national team stands for.

"I'm extremely disappointed about what happened during the minute's silence," he told a media conference.

: "I'm disgusted that these so-called fans embarrassed our country on an international stage" September 3, 2017

"Those are not our fans. I'm disgusted that these so-called fans embarrassed our country on an international stage.

"As a team we want to stand for good values and a tolerant, open-minded Germany."