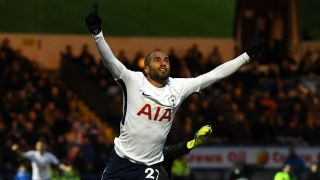 Lucas Moura feels Tottenham are capable of challenging to win the Champions League.

The winger left Paris Saint-Germain for the north London side in January after the arrival of Neymar and Kylian Mbappe pushed him out of the first team at Parc des Princes.

Tottenham came from two goals down to draw 2-2 with Serie A title-holders Juventus in the first leg of their round-of-16 tie last week.

And Brazil international Moura, speaking after starting and scoring in the dramatic FA Cup draw at Rochdale – also a 2-2 scoreline - on Sunday, backed Mauricio Pochettino's team to make an impact on the European stage.

"I believe that because we have a lot of quality, a great structure – I am really impressed – and I think we can dream with the Champions League."

When asked if Spurs have as much chance as PSG of winning the competition, he replied: "Why not?

"The Champions League is the most difficult cup but I think we have the capacity to win it if you always think in positives, always work hard. I think we did a big game against Juventus away. I am so happy with my new team."