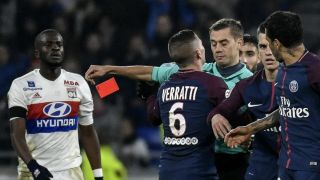 Unai Emery's leaders were without Neymar, saw Kylian Mbappe suffer an injury and had Dani Alves sent off in a thrilling top-of-the-table clash at Groupama Stadium that featured three contenders for goal of the season.

Jean-Michel Aulas said before the game that he ranks Nabil Fekir higher than Brazil superstar Neymar and the lofty praise of the Lyon president was justified in fantastic fashion inside two minutes.

Lyon captain Fekir curled in his third free-kick goal of the Ligue 1 season, beating the badly positioned Alphonse Areola in the PSG goal from well outside the right side of the penalty area.

A long period of stoppage time was added at the end of the first half following an injury suffered by Mbappe in a clash with Lyon goalkeeper Anthony Lopes, Layvin Kurzawa lashing home a tremendous volley from Alves' right-wing cross during the extra minutes.

Alves saw red early in the second half for angrily confronting referee Clement Turpin and Lyon eventually capitalised on their man advantage through substitute Depay, who shimmied into space and thumped a wonderful hit into the top-left corner from 25 yards.

In the absence of the injured Neymar, Edinson Cavani failed to record the strike that would make him PSG's outright record goalscorer and Lyon move up to second as a result of a win that breathes new life into the Ligue 1 title race.

PSG had won eight games in a row in all competitions but they fell behind in the second minute.

Lyon won a free-kick wide on the right flank, around 30 yards from goal, with Areola expecting Fekir to deliver a cross into the box.

But Lyon's star man had other ideas, whipping a sensational strike over the wall and out of Areola's desperate reach, the ball kissing the post on its way in.

PSG came close to equalising in similarly spectacular fashion when Lopes raced out of his goal to clear with his head, only to divert the ball straight to Cavani, who directed a 45-yard lob narrowly wide of the unguarded goal.

Seeking his history-making goal, Cavani headed a great chance from Angel Di Maria's precise delivery straight at Lopes, who then made a terrific one-handed stop to keep out a goalbound header from his own defender Jeremy Morel.

Already without Neymar, PSG had to substitute Mbappe after the forward was hurt in an accidental collision with Lopes, the teenager leaving the field on a stretcher.

And during the lengthy period of stoppage time added for Mbappe's injury, PSG equalised with a stunning goal.

Alves stood up a tempting cross from the right wing and his fellow full-back Kurzawa crashed an explosive strike in off the crossbar to send the teams into the interval all-square.

Marco Verratti sent a drive over the crossbar after 51 minutes and Kurzawa wasted an opening to add his second goal, but as PSG began to crank up the pressure they were reduced to 10 men.

Alves brought down Tanguy NDombele but reacted furiously to the correct award of a free-kick and squared up to referee Turpin, who sent the Brazilian off for dissent.

There was little on when Depay picked up the ball well outside the PSG box, but he carried the ball past two half-hearted challenges and smashed a glorious finish out of Areola's reach to boost Lyon's faint title hopes.