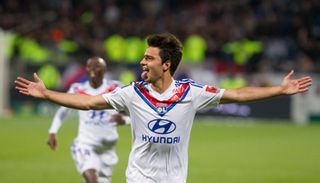 Lyon, who have 67 points, will take part in the third qualifying round of Europe's premium club competition while surprise packages Nice qualified for the Europa League play-off round after claiming fourth place with a 2-0 win at AC Ajaccio.

Nice finished with 64 points, one point ahead of Saint-Etienne who drew 1-1 at sixth-placed Lille.

Troyes were relegated after a 2-1 defeat at Valenciennes, joining Nancy and Stade Brest in Ligue 2.

Zlatan Ibrahimovic became the first player to score 30 goals in a single season since Jean-Pierre Papin reached that tally when playing for Olympique Marseille in 1989/90.

The Sweden striker chested in a Kevin Gameiro cross in the 51st minute and his team-mate then netted a double as champions PSG beat Lorient 3-1 away.

Third choice keeper Ronan Le Crom, in his only appearance of the season after coming on a as a second-half substitute, was sent off 10 minutes from time.

With no goalkeeper left on the bench, France centre-back Mamadou Sakho fulfilled that role but could not stop Arnaud Le Lan's penalty. First choice keeper Salvatore Sirigu was suspended.

At Lyon's Stade Gerland, Onyekachi Apam's handball earned the hosts a penalty that was converted by Lisandro midway through the first half.

Grenier doubled the tally with a jaw-dropping 35-metre free kick that went under Benoit Costil's bar.

Lyon's arch rivals Saint-Etienne, who qualified for the Europa League third qualifying round by winning the League Cup, settled for fifth after being held at Lille.

Salomon Kalou tapped in from a Ronny Rodelin header two minutes from the interval to put the northeners ahead only for Romain Hamouma to equalise with a deft curled shot shortly before the hour.

Josuha Guilavogui was sent off in the 67th minute after picking up a second yellow card as Saint-Etienne finished with 10 men.

The result benefited Nice, who snatched fourth place courtesy of goals by Dario Cvitanich and Eric Bautheac at Ajaccio.

Second-placed Olympique Marseille ended the season with a disappointing goalless draw at home against Stade Reims.

Ten of the 18 players who were on the team sheet when Marseille won the Champions League in 1993 stood in the middle of the pitch as they were celebrated by the crowd on the 20th anniversary of the 1-0 win against AC Milan.