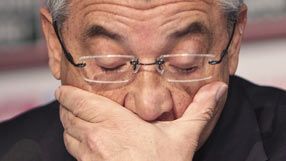 "The winter holidays of Schalke players will be short," the club said on their website on Sunday.

"They will start their holidays a day after the German Cup third round on December 21. It will end only four days later, with the first training session set for December 27."

Last season's runners-up suffered their worst defeat in 18 years when they surrendered without a fight against Kaiserslautern and dropped to 15th place, two points above the relegation spots.

Only three days earlier they had beaten Olympique Lyon 3-0 with a sparkling display of teamwork to advance alongside the French team into the Champions League round of 16.

Other German teams have given their players time off until early January, with the season resuming on January 15 after the winter break.

"This result cries out for consequences," Magath, who had spent heavily during the summer to buy Spaniard Raul and Dutch striker Klaas-Jan Huntelaar, warned after the loss to Kaiserslautern as angry fans demanded his resignation.