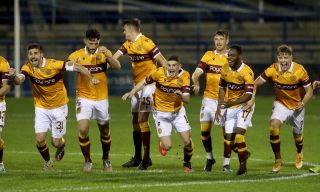 Motherwell boss Stephen Robinson paid tribute to the “magnificent” Trevor Carson after the goalkeeper’s penalty heroics saw them past Coleraine in the Europa League.

Carson, who recently returned to the side following a 20-month absence after suffering deep vein thrombosis, conceded two second-half spot-kicks as Motherwell threw away a two-goal half-time lead.

However, the Northern Ireland international made a brilliant extra-time save to keep the score at 2-2 and then saved all three of Coleraine’s shoot-out spot-kicks as Well progressed to the third qualifying round with a 3-0 win on penalties.

Robinson’s side are now due to take on Hapoel Beer-Sheva away from home after the Israelis came from a goal down in Albania to beat Laci thanks to two stoppage-time goals.

The former Northern Ireland assistant manager told Motherwell’s Twitter account: “A long night, I’ve been through about 25 million emotions. Ultimately we set out to get through to the next round, nobody will remember how we got through.

“The game should have been out of sight at 2-0. We said don’t give them anything to cling to and we did, we gave away a soft penalty. I haven’t seen it back but the ref gave it. From then on it’s a tough, tough game.

“They are a team with tremendous fight and spirit and character and they ran us very, very close.

“After the journey he has been on, what he has come through, he showed the character and resilience and quality as well with three penalty saves and one other save as well.

“We are in the next round of Europe, we have won three out of four. We are not playing at our best but we are grinding out results.

“Make no mistake, this is an unbelievably difficult place to come to. When we walked on to the pitch on Wednesday night we just knew our game would be dictated by mistakes and long balls.”

The grass was long and the pitch was bobbly but Motherwell took control early on only to look nervy after Coleraine’s first goal early in the second half.

"It was a banana skin. We showed character and got through."— Motherwell FC (@MotherwellFC) September 17, 2020

“They know how to play it, they play it very, very well,” Robinson said. “I am not being disrespectful to Coleraine, I have a lot of respect for the manager and the football club, they play to the conditions. We had to dig in and be very, very resilient.

Robinson has an injury worry ahead of Sunday’s trip to Aberdeen after midfielder Allan Campbell went off.

“For Allan to come off, it’s not good,” he said. “He didn’t know whether it was a kick or a pull. I’m praying it’s a kick because the wee man will get through that.”